The Galaxy Evolution Explorer (GALEX) satellite was a NASA mission led by the California Institute of Technology, whose primary goal was to investigate how star formation in galaxies evolved from the early Universe up to the present. GALEX used microchannel plate detectors to obtain direct images in the near-UV (NUV) and far-UV (FUV), and a grism to disperse light for low resolution spectroscopy.  The FUV detector ceased operations in 2009, but the NUV detector lasted the entire duration of the mission.  The telescope had a 1.25 degree field-of-view, and collected data as time-tagged photon events.  The telescope only took science data while behind Earth's shadow (referred to as an "eclipse").  Each eclipse lasted approximately 30 minutes, and could observe one or more pointings on the sky (known as "visits"), which could last 90 seconds up to the full ~30 minutes.  Multiple "visits" to the same part of the sky could then be combined by the GALEX pipeline to make a "coadd".  In addition to All-Sky, Medium, and Deep Imaging Surveys (shallower to deeper observations), GALEX conducted a Nearby Galaxy Survey and supported a number of Guest Investigator programs, ultimately observing 77% of the sky at various depths in at least one band.  After the primary mission ended, an extension was run by CalTech called the CAUSE ("Complete the All-Sky UV Survey Extension").  This mode of operation was funded by individuals or institutions, had relaxed spacecraft engineering constraints, and generally observed bright regions that were of limits during the primary missions, or were not visited long enough to enable the science the participating members wanted to do.  Some, but not all, of the CAUSE data is available at MAST.

THE ON-ORBIT PERFORMANCE OF THE GALAXY EVOLUTION EXPLORER

THE CALIBRATION AND DATA PRODUCTS OF GALEX

A Time-Tagged Database Of Every GALEX Photon Event

Mira Soars Through the Sky

New ultraviolet images from NASA's Galaxy Evolution Explorer shows a speeding star that is leaving an enormous trail of "seeds" for new solar systems. The star, named Mira (pronounced my-rah) after the latin word for "wonderful," is shedding material that will be recycled into new stars, planets and possibly even life as it hurls through our galaxy.  The upper panel shows Mira's full, comet-like tail as seen only in shorter, or "far" ultraviolet wavelengths, while the lower panel is a combined view showing both far and longer, or "near" ultraviolet wavelengths. The close-up picture at bottom gives a better look at Mira itself, which appears as a pinkish dot, and is moving from left to right in this view. Shed material appears in light blue. The dots in the picture are stars and distant galaxies. The large blue dot on the left side of the upper panel, and the large yellow dot in the lower panel, are both stars that are closer to us than Mira.

The Galaxy Next Door

Hot stars burn brightly in this new image from NASA's Galaxy Evolution Explorer, showing the ultraviolet side of a familiar face.  At approximately 2.5 million light-years away, the Andromeda galaxy, or M31, is our Milky Way's largest galactic neighbor. The entire galaxy spans 260,000 light-years across -- a distance so large, it took 11 different image segments stitched together to produce this view of the galaxy next door.  The bands of blue-white making up the galaxy's striking rings are neighborhoods that harbor hot, young, massive stars. Dark blue-grey lanes of cooler dust show up starkly against these bright rings, tracing the regions where star formation is currently taking place in dense cloudy cocoons. Eventually, these dusty lanes will be blown away by strong stellar winds, as the forming stars ignite nuclear fusion in their cores. Meanwhile, the central orange-white ball reveals a congregation of cooler, old stars that formed long ago.  When observed in visible light, Andromeda's rings look more like spiral arms. The ultraviolet view shows that these arms more closely resemble the ring-like structure previously observed in infrared wavelengths with NASA's Spitzer Space Telescope. Astronomers using Spitzer interpreted these rings as evidence that the galaxy was involved in a direct collision with its neighbor, M32, more than 200 million years ago.  Andromeda is so bright and close to us that it is one of only ten galaxies that can be spotted from Earth with the naked eye. This view is two-color composite, where blue represents far-ultraviolet light, and orange is near-ultraviolet light.

The Helix Nebula: Unraveling at the Seams

A dying star is throwing a cosmic tantrum in this combined image from NASA's Spitzer Space Telescope and the Galaxy Evolution Explorer (GALEX), which NASA has lent to the California Institute of Technology in Pasadena. In death, the star's dusty outer layers are unraveling into space, glowing from the intense ultraviolet radiation being pumped out by the hot stellar core.  This object, called the Helix nebula, lies 650 light-years away, in the constellation of Aquarius. Also known by the catalog number NGC 7293, it is a typical example of a class of objects called planetary nebulae. Discovered in the 18th century, these cosmic works of art were erroneously named for their resemblance to gas-giant planets.  Planetary nebulae are actually the remains of stars that once looked a lot like our sun. These stars spend most of their lives turning hydrogen into helium in massive runaway nuclear fusion reactions in their cores. In fact, this process of fusion provides all the light and heat that we get from our sun. Our sun will blossom into a planetary nebula when it dies in about five billion years.  When the hydrogen fuel for the fusion reaction runs out, the star turns to helium for a fuel source, burning it into an even heavier mix of carbon, nitrogen and oxygen. Eventually, the helium will also be exhausted, and the star dies, puffing off its outer gaseous layers and leaving behind the tiny, hot, dense core, called a white dwarf. The white dwarf is about the size of Earth, but has a mass very close to that of the original star; in fact, a teaspoon of a white dwarf would weigh as much as a few elephants!  The glow from planetary nebulae is particularly intriguing as it appears surprisingly similar across a broad swath of the spectrum, from ultraviolet to infrared. The Helix remains recognizable at any of these wavelengths, but the combination shown here highlights some subtle differences.  The intense ultraviolet radiation from the white dwarf heats up the expelled layers of gas, which shine brightly in the infrared. GALEX has picked out the ultraviolet light pouring out of this system, shown throughout the nebula in blue, while Spitzer has snagged the detailed infrared signature of the dust and gas in yellow A portion of the extended field beyond the nebula, which was not observed by Spitzer, is from NASA's all-sky Wide-field Infrared Survey Explorer (WISE). The white dwarf star itself is a tiny white pinprick right at the center of the nebula.  The brighter purple circle in the very center is the combined ultraviolet and infrared glow of a dusty disk circling the white dwarf (the disk itself is too small to be resolved). This dust was most likely kicked up by comets that survived the death of their star.

This image is a blend of the Galaxy Evolution Explorer's M33 image and another taken by NASA's Spitzer Space Telescope. M33, one of our closest galactic neighbors, is about 2.9 million light-years away in the constellation Triangulum, part of what's known as our Local Group of galaxies.  Together, the Galaxy Evolution Explorer and Spitzer can see a broad spectrum of sky. Spitzer, for example, can detect mid-infrared radiation from dust that has absorbed young stars' ultraviolet light. That's something the Galaxy Evolution Explorer cannot see. This combined image shows in amazing detail the beautiful and complicated interlacing of the heated dust and young stars. In some regions of M33, dust gathers where there is very little far-ultraviolet light, suggesting that the young stars are obscured or that stars farther away are heating the dust. In some of the outer regions of the galaxy, just the opposite is true: There are plenty of young stars and very little dust.  Far-ultraviolet light from young stars glimmers blue, near-ultraviolet light from intermediate age stars glows green, and dust rich in organic molecules burns red. This image is a 3-band composite including far infrared as red. 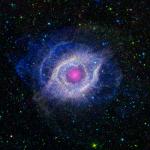