FUSE Investigates a Clash of Titans
(Click on most figures to see larger versions.)


New FUSE satellite observations are shedding light on the the properties of a rare, extremely massive, young binary star system in the nearby galaxy called the Large Magellanic Cloud.

Look in any standard astronomy text book, and you will find a listing of stellar spectral types that looks like this: O, B, A, F, G, K, M. Astronomers have a penchant for devising obtuse classification systems that make sense to them, but seem peculiar when foisted upon the unsuspecting Astro 101 class, let alone the general public! Left to their own devices, students and teachers have developed numerous mneumonics to help them remember this sequence, not the least of which is the classic "Oh, Be A Fine Girl (Guy) Kiss Me." In any event, the presnce of the "O" at the left of the sequence is significant. The O-stars are the hottest, most luminous, and most massive normal stars. 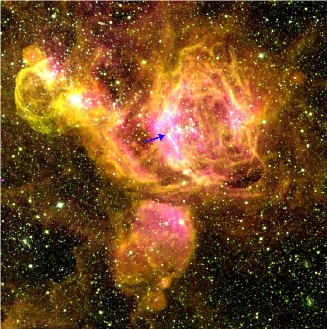 Caption: This picture shows the glowing cloud of hydrogen gas known as N51 in the nearby galaxy called the Large Magellanic Cloud. The gas cloud is excited to glow by embedded hot stars which have formed from the gas. The blue arrow indicates the position of LH54-425, which looks like a single blob of light but in reality is a close binary pair of massive O stars. The Large Magellanic Cloud is at a distance of about 170,000 light years from earth. (Image credit: Chris Smith, and the U. of Michigan Curtis Schmidt Telescope at Cerro Tololo Interamerican Observatory.)

But the O-stars pay a heavy price for their extravagant lifestyles. They burn their nuclear fuel at prodigious rates, and rush through their lifetimes in a mere couple of million years, thousands of times more quickly than low mass stars such as our sun. But because they are extreme, they are also very rare.

When we look at regions of active star formation in our Galaxy or nearby galaxies, what we see is dominated by the hot, massive stars that have formed. The ultraviolet emission from these hot stars is responsible for ionizing the glowing gaseous nebulae that surround the stellar nursery. Howling stellar winds from these hot stars race outward into the gas, stirring it and energizing it. Even as these massive stars die as supernova explosions, their energy affects the surrounding region of space. Ultimately, the energy supplied to the gas and dust drive them outward, effectively turning off the star formation process in the region influenced by these stars.

A recent study of stars in the region called N51 in the neighboring galaxy the Large Magellanic Cloud has identified a single blob of light that in reality is not a single star, but a binary. But this is no ordinary binary star. Cataloged as LH54-425, this point of light is actually two of the most massive O-stars locked in a tight orbit of only 2.25 days duration. This means that they are separated by only 1/6th of the earth-sun distance. Recent optical spectroscopy indicates masses of 62 and 37 times the mass of our sun. With a combined mass near 100 solar masses, this is one of the most extreme binary systems known in the local universe. 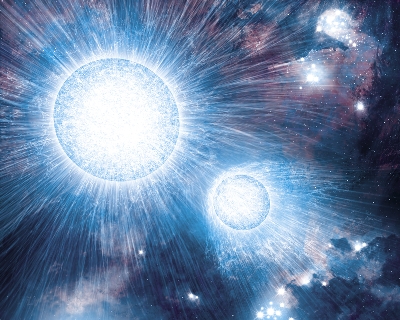 Caption: An artist's concept provides an indication of what a close-up view of the LH54-425 system might look like. The fierce stellar winds from the two massive O stars are fighting for control, but the wind from the more massive component is overwhelming, pushing the interaction region into a cone around the less massive star. The signature of this interaction can be seen in ultraviolet spectra from FUSE. (Image credit: NASA illustration by Casey Reed.)

Each star blows off a powerful stellar wind, and FUSE's observations have provided the first details of what happens when the two supersonic winds collide. The wind collision zone wraps around the smaller star and produces a curved surface of superheated gases that emit X-rays and far-ultraviolet radiation. FUSE is ideal for these measurements because the lines that best indicate the properties of stellar winds show up in the far ultraviolet part of the spectrum, where FUSE is most sensitive.

The more massive star is shedding material at a rate of 500 trillion tons per second (about 400 times greater than the rate the sun loses mass through the solar wind), with a speed of 5.4 million miles per hour. The smaller star is ejecting mass at about one-tenth the rate of its sibling. The mass loss rate of both stars is consistent with other single stars having the same temperature and luminosity. However, the tight configuration of the binary system provides not only a dynamic interaction, but permits unique insights into the physics in the interaction region. 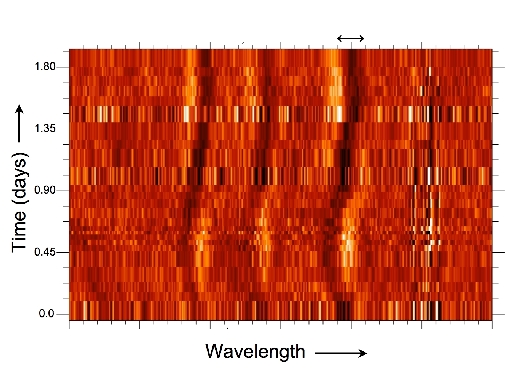 Caption: This figure shows a time series of FUSE spectra taken at various intervals around the binary orbital period of 2.25 days. The spectra shown are centered on several absorption lines that arise in stellar winds. The arrow at the top of the figure corresponds to Doppler shifts of 500 km/s. Differences not only in the position but the detailed structure of these spectral lines provide information about the interacting stellar winds from the two binary components. (Image credit: George Sonneborn, NASA/GSFC and the FUSE project.)

Since such stars evolve rather quickly, it is interesting to speculate about what the future of this star system may hold. As the stars age and swell in size, they will begin to transfer substantial amounts of mass to each other. This process could begin in as little as a million years. The stars are orbiting so close to each other that they are likely to merge as they evolve, producing a single extremely massive star like the more massive member of the Eta Carinae binary system, one of the most massive and luminous stars in the Milky Way Galaxy, with perhaps 100 solar masses.

"The merger of two massive stars to make a single `super star' of over 80 suns could lead to an object like Eta Carinae, which might have looked like LH54-425 one million years ago," says Dr. George Sonneborn of NASA's Goddard Space Flight Center in Greenbelt, MD, and one of the primary scientists involved in the research. "Finding stars this massive so early in their life is very rare. These results expand our understanding of the nature of very massive binaries, which was not well understood. The system will eventually produce a very energetic supernova."

NASA News page on this result.