Using NASA's Far Ultraviolet Spectroscopic Explorer (FUSE) satellite, researchers have found the first direct evidence of a hot binary companion star to the enigmatic star Eta Carinae (Eta Car for short), one of the most massive stars in our Milky Way galaxy. The observation solves a long standing mystery and provides the first direct information about this companion star.

At a distance of 7,500 light years from earth in the direction of the southern constellation Carina (the keel of the mythological Argonaut's ship), Eta Car has been the subject of intense studies by both ground and space-based telecopes for decades. It resides near the heart of the great Carina Nebula, one of the largest star forming factories in the Milky Way. (See figure below.)

Caption: The giant star forming region known as the Carina Nebula (NGC 3372) is shown in a ground-based view at left. (Region shown is approximately 300 light-years across.) Eta Carina lies at the heart of this huge nebula, in a region surrounded by gas and dust (upper right-3 light-years across). Hubble's close-up view of the region directly around the star is shown at lower right. The bipolar nebula was likely created during an outburst seen in 1843. Not even Hubble, however, could see the companion star directly. This star has now been detected with FUSE. (Collage assembled by W. Blair, JHU. Individual photo credits provided below.) (Click on figure for enlarged version.)

Eta Car is an unstable and very luminous star in the final stages of its lifetime. It underwent a gigantic outburst in 1843 and became one of the brightest stars in the sky. The explosion created two spectacular bipolar lobes and an equatorial disk moving outward at 1.4 million miles per hour (2.4 million kilometers per hour), visible in a now famous Hubble Space Telescope image of the tiny region right around the star. But apparently Eta Car survived its near death experience, at least this time.

The idea that what we see as "Eta Car" might actually be two stars, Eta Car A and Eta Car B, has been postulated many times to explain its observed properties, including especially an observed 5.5 year cyclic variation in light intensities at various wavelengths. But Eta Car's purported partner would be at such a small angular separation that it could not be imaged directly, and hence has evaded direct detection, until now.

"Eta Carinae has remained one of the great mysteries of stellar astronomy," said Rosina Iping, a research scientist at Catholic University of America in Washington, DC and first author of the paper on this result in the Nov. 1, 2005, Astrophysical Journal Letters. "But the unique capabilities of FUSE, along with the very high temperature of the companion star, have allowed us to detect the companion star's light directly and study the star's properties." 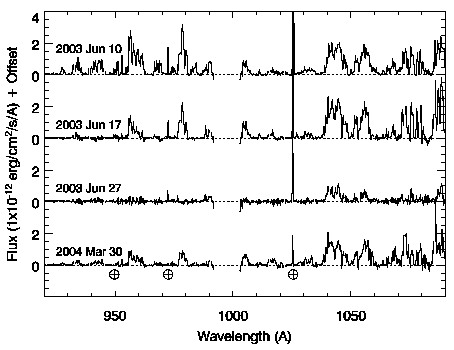 The detective work involved obtaining a sequence of FUSE far-UV light spectral observations just prior to the period of X-ray eclipse predicted for late-June 2003, and then another spectrum several months later after the eclipse. By comparing these spectra in a relative way, the spectrum of the companion star, Eta Car B, can be discerned separately from that of the primary star, Eta Car A.

The companion star has not only been detected, but some of its characteristics are being determined for the first time. Eta Car B must be considerably hotter that Eta Car A because it dominates the light at short ultraviolet wavelengths observed by FUSE. Also, the FUSE data provide evidence for a strong wind from Eta Car B, and an overabundance of nitrogen, consistent with a young, hot star. The presence of a wind is important because colliding stellar winds from Eta Car B and Eta Car A provide the most likely source for the observed X-ray emission from this source. Models generated to match the X-ray wind interaction provide an estimate of 35,000 K for Eta Car B, while Eta Car A is known to have a temperature more like 15,000 K.

Caption: The binary stars Eta Car A (right) and B (left) are shown in an artist's concept (right panel). The winds from the two stars interact in the region between them, forming the arched emission region that produces the observed X-ray emission. The separation of the stars is only 10 times the earth-sun distance. Artwork credit: Stefan Ivarsson, NASA/GSFC. (Click on figure for enlarged version of artwork.)

"Astronomers have been searching for Eta Carinae's companion for years," said George Sonneborn, FUSE Project Scientist at NASA's Goddard Space Flight Center, Greenbelt MD. "This direct detection of the companion star will greatly improve our understanding of one of the most enigmatic objects in astronomy."

The NASA news release about this observation can be found HERE.