Presentation courtesy of William Blair, JHU.
Note: 3/6/2007 See the "Results" section at the bottom of this page, added after the observation was accomplished!)

On February 28, 2007, the New Horizons spacecraft, built by the Johns Hopkins Applied Physics Laboratory in Laurel and launched in January 2006, swung by Jupiter in order to receive a gravitational boost on its way toward Pluto, where it will arrive in 2015. However, in addition to this pragmatic aspect of the flyby, it also provided an excellent opportunity to perform science relevant to the Jovian system itself. 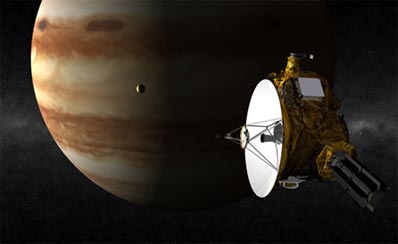 Caption: This is an artistic rendering of the New Horizons spacecraft as it swung by the giant planet Jupiter on its way toward Pluto. One of Jupiter's moons can be seen in front of the planet's swirling atmosphere. Credit: Johns Hopkins University Applied Physics Laboratory/Southwest Research Institute (JHUAPL/SwRI).

After swinging by Jupiter, New Horizons is following a path that takes it almost directly down Jupiter's magnetotail, which is the region of high energy particles and magnetic fields that is being swept outwards from the planet by the solar wind. Since these magnetic fields are anchored at Jupiter's poles, we had a rare (essentially unique!) opportunity to study the physical conditions in the magnetotail in situ (by New Horizons) and in the polar auroral zones of Jupiter, using observations from ground based telescopes and in earth orbit. 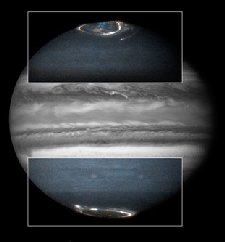 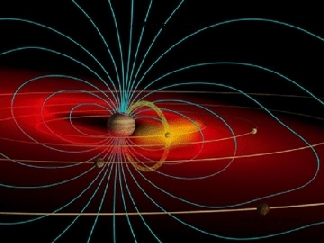 Caption: (left) A combined optical and ultraviolet view of Jupiter obtained Feb. 17-21, 2007, with two cameras on the Hubble Space Telescope. The Wide Field Planetary Camera 2 was used to image the whole planet, while the Advanced Camera for Surveys looked near the poles in ultraviolet light. The UV images highlight the active auroral regions near the poles. It is these regions that will be observed with FUSE to infer the excitation and physical conditions in the auroral zones, in support of the New Horizons flyby. (right) A artist's depiction of the Jovian system, where blue lines indicate the magnetic field lines and orange and yellow indicate a ring of plasma arising from the moon Io. Some of this material is picked up by the magnetic field and deposited at Jupiter's poles. Image credits: (left) NASA, ESA, J. Clarke (Boston University), the Hubble Heritage Team(STScI/AURA), and J. Spencer (SwRI). (right) J. Spencer (SwRI). (Click on scisumm/figures for enlarged versions.)

Ultraviolet emissions are key to understanding these interactions. Hubble Space Telescope images in ultraviolet light show rings of emission near Jupiter's poles that occur in regions where the planet's strong magnetic field encounters the atmosphere. Trapped high energy particles (mostly electrons) impinge upon the atmosphere and cause it to glow. Hence, by studying the distribution and spectrum of the emission, scientists can learn about all kinds of things.

But Hubble couldn't do the job alone. While Hubble images the UV light, it cannot observe the far-ultraviolet spectrum of the aurora. Spectroscopic data contain the most information about the physical conditions in the emitting plasma. FUSE observes in far-ultraviolet light and breaks this light into a spectrum for analysis. (See below.) Also, FUSE can observe the Io plasma torus, a ring of hot gas whose material originates on Jupiter's moon Io. This material gets picked up by the magnetic field and rains down on Jupiter's polar regions. Since these elements of the system are all linked together, getting a broad range of observations provides the best opportunity to understand the whole system.

FUSE observed Jupiter several times previously, much earlier in the mission. But since then, the FUSE spacecraft has had a number of technical problems that now make FUSE observations in the part of the sky that includes Jupiter nearly impossible. (See this earlier status report for more information about that situation.) But as luck would have it, a brief period of predicted stability for FUSE at Jupiter's location existed at a perfect time--a couple of days after New Horizons closest approach! We took advantage of this coincidence to obtain important supporting data for the New Horizons flyby.

It took more than a month of preparations on the part of the FUSE operations team to attempt this observation. The slew down to Jupiter's position (and back again to a safe position for FUSE operations) was very tricky to schedule safely. And of course, Jupiter itself moved with respect to the background stars, which makes satellite observations even more difficult. But all the planning paid off, and the FUSE observation occurred right on schedule.

The FUSE observations of Jupiter were completely successful! The tricky slews (spacecraft motions) to and from Jupiter performed as planned, and the pointing stability during the observations was excellent.

Two pointings were made at the auroral zones, and a tiny 20 Angstrom region of one spectrum is shown in the figure below, courtesy of Prof. Paul Feldman, JHU. The upward spikes on the plot are emission lines of molecular hydrogen, excited by electrons caught in Jupiter's magnetic field as they slammed into the upper atmosphere of the planet. The relative intensities of the various peaks carry information about the excitation conditions in the plasma. An observation of the Io plasma torus was also carried out during the observation period. 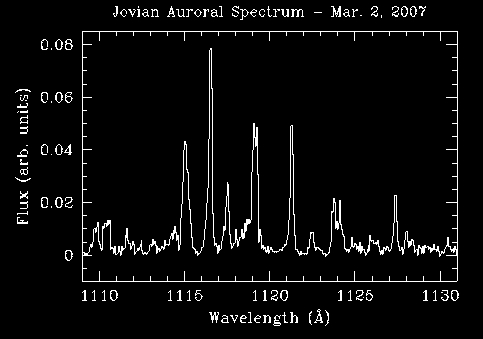 Caption: A small portion of one FUSE spectrum of Jupiter's auroral zones, obtained March 2, 2007. Data made available courtesy of Dr. Paul Feldman and the New Horizons team. (Click on the figure to see an expanded version.)

It will take months of coordinated work between the various scientists involved to interpret the FUSE data in relation to data from the New Horizons spacecraft and other observatories, but for now, the data are in hand! Dr. Feldman and the New Horizons team members have both expressed their thanks to the FUSE operations team for the efforts "above and beyond" that made this observation possible.