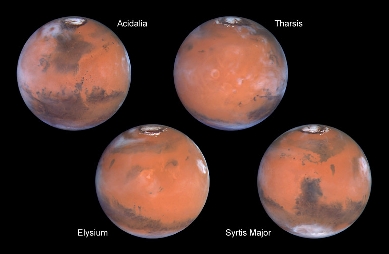 Caption: Hubble Space Telescope images of Mars at different phases of its rotation. Photos such as these, taken at different times during the Martian year, indicate a complex interplay between the polar caps and the tenuous Martian atmosphere. See THIS LINK for more information.

Hydrogen is the dominant component of normal matter in the universe, and molecular hydrogen (H2) is thus also very prevalent. It is somewhat surprising then, especially considering all of the probes that have studied Mars over the years, that H2 has never been detected in the atmosphere of Mars. Until now.

With it's excellent sensitivity at far-ultraviolet wavelengths, the FUSE satellite has observed Mars and has detected several faint emissions from this important constituent. The results are detailed in an article in the journal Science for Nov. 30, 2001. The figure below shows a portion of a FUSE spectrum near 1070 Angstroms (107 nm) where the faint emission lines of H2 are indicated.

Caption: A small portion of the FUSE spectrum of Mars showing emission from one of the molecular hydrogen lines at 1071 Å in the far ultraviolet. The histogram is a graphical representation of the FUSE data, where the vertical axis represents brightness or intensity and the horizontal axis is increasing wavelength. The observed brightness of the H2 features in the spectrum can be used to understand the amount of water escaping from the upper atmosphere of Mars. With other measurements and assumptions, the amount of water present early in Mars' history can be assessed.

What are the implications of this observation? The ultimate source of H2 is expected to be water, H2O. H2 in the atmosphere of Mars is thought to be created in the middle layers through photochemical processes, driven largely by solar ultraviolet radiation. H2 molecules are very light, and can diffuse up to the upper atmospheric levels. The escape of atoms and molecules from the upper atmosphere depends on the mass of the atom or molecule and the escape velocity. Mars is less massive (and has a lower escape velocity) than earth, and so it loses material at different (but predictable) rates. By observing the current amounts of various constituents in the upper atmosphere, one can use models of the physical processes to work backwards and understand the differing conditions (and relative amounts of various constituents) at various times in the past. A direct measurement of H2 has always been missing from this analysis. Predictions for the amount of H2 from such models had come in at a value of 40 parts per million (ppm). The FUSE measurements, however, come in at a lower value near 15 ppm, permitting the atmospheric models to be corrected and improved. 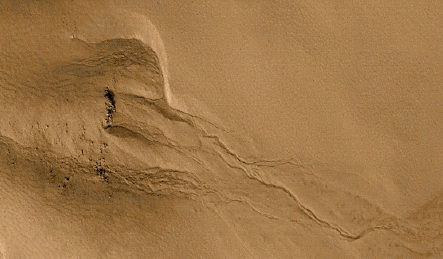 Caption: A Mars Global Surveyor image showing a region of gullies, quite possibly formed by the release of sub-surface water deposits. See THIS LINK for more information.

For decades, probes to Mars have returned pictures of canyons and gullies that seem to be explainable by release of sub-surface water deposits (see above photo). How much water remains tied up in the regolith of Mars today remains a mystery. Other measurements have shown water ice to be a constituent of the Martian polar caps, and water clouds over low-lying regions have also been seen (see image below). But how much water did Mars start out with?

Armed with their improved model of the atmosphere and its constituent loss rates, Krasnopolsky and Feldman have been able to make another big step: estimating the amount of water on Mars at much earlier times in its evolution. The estimates are surprising: between now and a point about 3.5 billion years ago, Mars has lost enough water to blanket the entire planet to a depth of 30 meters (amost 100 feet!). Extrapolating back even further, it appears that Mars started with even more water per unit mass than the earth did! However, with much lower gravity, Mars has lost a much larger fraction of it's water than earth.