FUSE Observations of the Central Star of M27, the Dumbbell Nebula
(Click on most figures to see larger versions.) 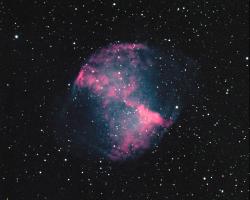 The Dumbbell Nebula, also known as M27 (#27 from Charles Messier's catalog of diffuse objects) is a nearby planetary nebula, about 1240 light years away in the constellation Vulpecula. The picture at left was taken on good old "Ektachrome" film, and shows effectively a true color image of the nebula. (We should tell you, however, that this particular picture was taken at the prime focus of the Kitt Peak 4 meter telescope!) The red is glowing hydrogen gas, excited by UV radiation from the star at the very center of the nebula. This star is really just the dense core of the original star, which is coming to the end of its lifetime and is puffing off its outer layers to form the nebula we see. We expect the sun to go through such a phase as well, but not for about 5 billion years!

Below we show a deeper image of the nebula, showing its full extent. The expanding nebula is about 2 x 3 light years in size. At right is an enlargement of the central region, showing the core of the star, which is on its way to becoming a white dwarf star. Such objects typically contain about half the mass of the sun in an object about the size of the earth, so these are very dense objects. The current temperature of this core is about 130,000 degrees, so even though it is small is size, it packs quite a punch in terms of heating the surrounding gas. Such objects make great targets for FUSE, because they output a lot of ultraviolet light. 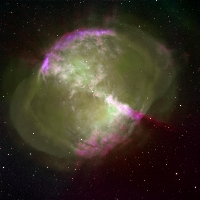 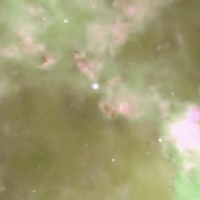 Caption: (left) Full extent of the nebula, as seen with the NOAO WIYN telescope. (right) Enlargement of the central region, showing the nasent white dwarf star.

As the picture above (right) shows, there is a lot of material between us and the central star. This material actually absorbs the star's light, leaving a signature or fingerprint of this material in the FUSE spectrum. When FUSE observed this star, we got quite a surprise: even though the central star is very hot, there is a lot of molecular hydrogen in the surrounding material! Instead of simply breaking the hydrogen molecules apart, the molecules are being excited to very high states of excitation. The molecular gas is at about 2500 degrees (Kelvin), or at least ten times hotter than normally seen in diffuse clouds of interstellar gas. In the FUSE spectrum below (which is a tiny part of the overall FUSE spectrum), everything marked in blue is attributable to molecular hydrogen absorption lines.

Caption: A small (10 Angstrom) portion of the FUSE spectrum near the hydrogen Lyman beta line. THe FUSE data are shown in black and the pink line shows an absorption line computer model fit to the spectrum. All of the features marked in blue are due to molecular hydrogen. Caution! Clicking on this figure will attempt to load a 3.3 Mb Postscript file showing the entire spectrum!

Observations such as this one immediately pose a number of questions to scientists: How does molecular gas survive in such harsh environments? What are the processes that create and destroy molecular hydrogen, and are they balanced, or is one process winning out? How does such material shed by stars blend back in with interstellar gas, and ultimately go on to form new stars? Luckily, FUSE data on objects such as this can go a long ways toward answering some of these questions.