The regions of space out between the stars are not empty, but rather are filled with a tenuous conglomeration of gas and dust, which makes up the interstellar medium (ISM). Likewise, the vast regions between galaxies and groups of galaxies is not entirely empty. The tenuous gas in these regions, made up primarily of hydrogen and helium atoms, is called the Intergalactic Medium (IGM). If we could see the IGM, it would appear somewhat like a "fog" that becomes thicker and more opaque as we look farther and farther away, perhaps something like the graphic at left.

One reason we can see through the fog is that the IGM is highly ionized. A neutral hydrogen atom has one electron, and once that electron is removed (ionized) the hydrogen atom can no longer absorb light. Hence, even though there is material in the IGM, it lets light from distant objects through!

Or most of it, anyway. The IGM is lumpy, and so there are places that are not so highly ionized (sometimes we call these "clouds"). The hydrogen in these clouds shows up as absorption dips in spectra at optical wavelengths for highly red-shifted (very distant) quasars. (See bottom panel in figure below.) These clouds contain significant amounts of matter, but do not show the ionized gas, which could be the lion's share of the material present. One of the questions has always been, how much matter is really out there in the space between the galaxies?

Enter FUSE! FUSE has the ability to observe helium in highly red-shifted quasars. Since helium has two electrons, it is much harder to completely ionize. Hence, we should be able to see much more of the material in the IGM by its signature absorption in a FUSE spectrum. The trick is to find a distant quasar with sufficient far-ultraviolet flux to use as a background source. To date, FUSE scientists have only found ONE such quasar, and object known only by its catalog identification, HE2347-4342. This object has a visual magnitude V=16.0, or roughly 10,000 times fainter than can be seen with the unaided eye. At a redshift of 2.885, the quasar lies about 10 billion light years distant, and is thus behind much of the "fog" of the IGM as viewed from earth.

Even though HE2347 is the brightest known quasar to use for this measurement, it required a Herculian effort to make this observation. FUSE observed this target for over 20 days, accumulating a total of over 360,000 seconds of orbital night viewing time! After a very careful analysis and screening of the data, the far-ultraviolet spectrum shown below was extracted and compared with an optical spectrum of the object that showed the hydrogen absorption along the same sightline. 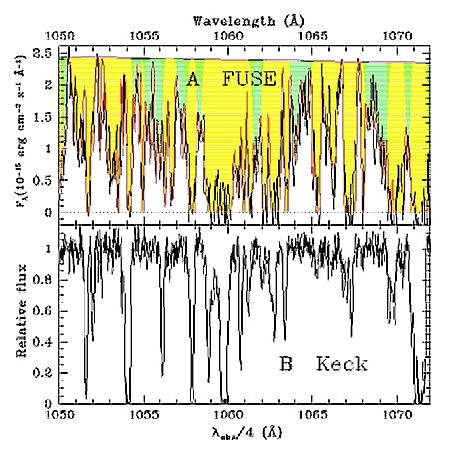 Caption: The black line in the top panel shows a small portion of the FUSE spectrum of a distant quasar, HE2347-4342, as observed in far-ultraviolet light. The dips (or absorptions) relative to the top line are primarily caused by helium in the IGM. The bottom panel shows a portion of an optical spectrum obtained with the 10 meter Keck Telescope in Hawaii. The absorptions here arise primarily from hydrogen, and have been carefully aligned with their helium counterparts in the top panel.

The regions highlighted in yellow show helium absorptions that have corresponding hydrogen absorptions. However, the regions shown in green are portions of the spectrum where no hydrogen had been seen previously, but where helium absorption is plainly visible with FUSE. This is material whose presence was not known before, but which now can be measured.

What did we see? First of all, we saw a lot of absorption in helium that corresponds to the hydrogen clouds that were known from the optical data. This allowed us to study the ratio of hydrogen and helium absorptions and understand something about the overall ionization state of the IGM. Somewhat surprisingly, we find that ionizing UV radiation from both quasars and giant bursts of star formation in the early universe are required to understand the variations in ionization that we see.

But perhaps more importantly, we see a number of places in the FUSE data where helium absorbs but that have no corresponding hydrogen absorptions. These are more highly ionized regions, and hence, this is material whose presence was simply not measurable before! The presence and structure of this component matches theoretical models of how structure formed in the early universe, thus constraining ideas about how stars and galaxies first formed out of the cosmic soup created in the Big Bang itself. Interestingly, although this material in the IGM is extremely tenuous, there is so much volume involved in this component of the universe that the total mass involved is staggering: there is more material locked up in this previously invisible component of the universe than in all of the known stars and galaxies together!