Astronomers Trace "Fossil" of Big Bang Across our Galaxy
(Click on figures to see larger versions.)

Based on the results reported in a paper by J. Linsky et al., The Astrophysical Journal, Volume 647, page 1106. Presentation courtesy of William Blair, JHU.

The measurements are of deuterium, a "heavy" form of the hydrogen atom that contains both a proton and a neutron in the atomic nucleus. Astronomers believe that a set amount of deuterium relative to regular hydrogen was created about 1000 seconds after the Big Bang, and that no new deuterium has been created since then. Rather, deuterium atoms have only been destroyed since that time by nuclear reactions in stars. The more gas has been processed through stars, the lower the amount of deuterium that should be observed today. At the same time that stars are destroying deuterium, they are creating heavier elements through nuclear fusion. Hence, the abundance of deuterium observed locally in our Galaxy should provide a critical test of how the heavier elements like carbon and oxygen have been formed over cosmic history.

But deuterium abundances have been notoriously difficult to determine accurately. Before the launch of NASA's FUSE satellite in June 1999, only a handful of measurements were available. Most of these agreed with a fairly constant value for nearby regions of our Galaxy, but there were a few outlying measurements that appeared to be either higher or lower, for reasons that were not understood.

"For 35 years, the true amount of deuterium in our Galaxy has remained a mystery because measurements of its abundance in the gas between stars by instruments on several satellites have yielded conflicting results," said Dr. Jeffrey Linsky of JILA, a joint institute of the University of Colorado and the National Institute of Standards and Technology in Boulder Colorado, who led the analysis. 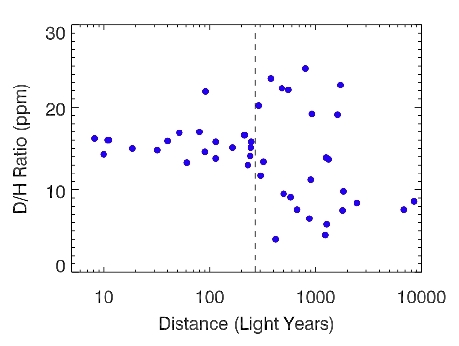 Caption: The deuterium-to-hydrogen ratio in "parts per million" (ppm) is plotted versus distance to each observed star. The points to the left of the dashed line indicate an essentially constant value for this ratio in the regions nearest the sun. However, points to the right of the dashed line scatter up and down, indicating variations in the ratio at larger distances. (Graphic courtesy of George Sonneborn, using data from Linsky et al. 2006. Full reference given above. Click image to enlarge.)

Measuring deuterium is one of the special capabilities of the FUSE satellite. A major result from six years of FUSE observations is that this variability in the amount of deuterium in interstellar gas is real. Scientists have used hundreds of hours of FUSE observing time to measure deuterium abundances in the gas toward dozens of stars, both near and far, and have found a striking pattern.

"Gas near to us shows a nearly constant value of deuterium, but beyond the local region values vary dramatically," said Warren Moos, professor at Johns Hopkins and the FUSE principal investigator. "There's really no doubt about it anymore."

But what could be causing these variations had left scientists stymied, until now.

"Our analysis shows us that the very low gas phase abundances of deuterium measured in many regions results from depletion of deuterium onto interstellar dust grains where it cannot be detected," said Linsky. "In other regions that have been disturbed by supernova explosions or radiation from hot stars, the dust grains can be vaporized and deuterium is returned to the gas phase."

CLICK HERE for a figure that demonstrates this effect graphically. (Graphic by Jeff Fal, JILA.) 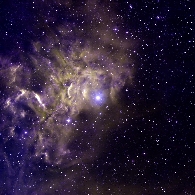 Caption: (left) The star AE Aurigae is embedded in a region of space containing smoke-like filaments of carbon-rich dust grains. Over time, deuterium atoms can attach to the dust particles where they cannot be detected. (Image credit: T.A. Rector and B.A. Wolpa, NOAO, AURA, and NSF. See http://antwrp.gsfc.nasa.gov/apod/ap011204.html .) (right) The graceful arcs of the Veil Nebula (Cygnus Loop) supernova remnant are seen against the rich star field of the Milky Way. The passage of shock waves such as this through interstellar space may play a key role in releasing deuterium atoms from interstellar dust grains back into the gas phase of the interstellar medium. (Image © Steve Mandel, Hidden Valley Observatory; used with permission. See also http://antwrp.gsfc.nasa.gov/apod/ap010928.html .)

The theoretical underpinning of this result is largely due to Bruce Draine, an astrophysicist at Princeton University. His computer modeling of dust grains in interstellar space show how, in regions that remain undisturbed for long periods, deuterium atoms systematically leave the gas phase and replace normal hydrogen atoms in dust grains. This leads to low observed values of deuterium in the gas. When a region is disturbed by supernova shock waves or nearby hot stars, the dust grains are vaporized, releasing the deuterium atoms back into the gas. This explains the variations in gas phase deuterium observed with FUSE.

There is some direct observational underpinning of this concept as well. High flying airplanes have managed to collect small samples of interstellar dust particles from the very top of our atmosphere before they burn up. Laboratory studies of such particles do indeed show significant increases of deuterium in comparison to regular hydrogen. 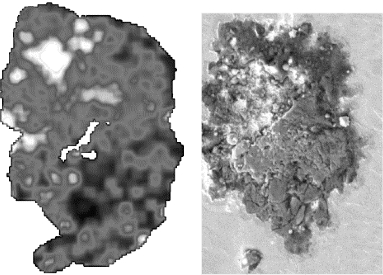 Caption: The image at right shows interplanetary dust particle L2011 D11, which was captured in the Earth's upper atmosphere by a NASA airplane. This scanning electron micrograph shows the complex structure of these fragile particles, which can be partially or totally vaporized by the passage of a supernova shock wave or by heating from a nearby hot star. At left is a deuterium to hydrogen ratio map of the same particle, with white areas showing strongly enhanced D/H ratios. (Image from S. Messenger (2002), Planetary and Space Science, 50, 1221. Used with permission.)

"Assuming our interpretation of the FUSE data is correct, the high values of gas phase deuterium are close to the real total deuterium abundance in our Galaxy," notes Moos.

These values are only 15% or so below the deuterium value thought to have arisen from the Big Bang. Models of our Galaxy's chemical evolution to date have normally assumed a much lower deuterium abundance, and thus much more processing of material through stars over time than is indicated by the FUSE result. Alternatively, the infall of significant amounts of primordial gas from outside the Galaxy (gas with relatively high deuterium abundance) might have occurred in the past, with this material artificially raising the galactic deuterium values. Either way, it is now clear that our understanding of the chemical evolution of our Galaxy has been missing key information. Accounting for the FUSE result will improve these models and lead to a better understanding of the chemical evolution of our Galaxy and galaxies in general.

"This result has been a long time in the making," said George Sonneborn, NASA project scientist for FUSE. "It is a testament to the determination and effort of the entire FUSE team, and it is clearly a legacy of the mission."

NASA Support Site for this Result


NASA press release on this result:
NASA FUSE Satellite Solves the Case of the Missing Deuterium