Piercing the Veil: FUSE Observes a Star Behind the Cygnus Loop Supernova Remnant
(Click on most figures to see larger versions.)

The Veil Nebula (left) is a delicate network of glowing gaseous filaments in the summer constellation of Cygnus the Swan. A favorite of amateur astronomers, the Veil is part of a larger nebula known as the Cygnus Loop, the leftovers of a star that exploded some 5000 to 8000 years ago. The Cygnus Loop has been called the prototypical middle-aged supernova remnant. By astronomical standards it is nearby and has little foreground dust in the way, making it observable in many kinds of light, from X-rays to radio waves, and everything in between.

Each supernova explosion deposits a huge amount of energy into a shock wave that expands and heats the surrounding regions of space, sweeping the tenuous gas and dust in interstellar space into a shell. In the case of the Cygnus Loop, this gas has been heated by the passage of the supernova shock wave and the gas cools by emitting the light we see. Thus, normally invisible regions of space are made visible for study by astronomers, who use these observations to understand the characteristics of the interstellar medium-the vast regions of space out there between the stars. 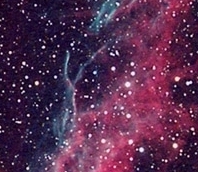 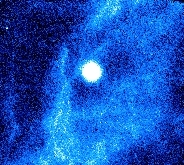 Caption: (left) Optical image of a small portion of the eastern Cygnus Loop "Veil Nebula" region. (right) The appearance of the same region in ultraviolet light. Note the one star that pops out in ultraviolet light! FUSE has now shown that this star is behind the supernova remnant. (For more on the optical image, taken by amateur astronomer Steve Mandel, visit THIS SITE.

Occasionally, astronomers get lucky and find an ultraviolet-bright star in projection behind a supernova remnant. In this special case, astronomers can also observe gas in absorption against the background star. Emission and absorption measurements tell us different but complementary information about the interstellar medium. The emission brightness depends on the I(particle density) squared, while the absorption depends linearly on density and on the path length through the emitting gas. Combining these observations provides unique information for astronomers. This trick has only been done for a couple of supernova remnants, and never for the Cygnus Loop...until now.

In 1995, a package of ultraviolet telescopes called the Astro Observatory flew a two week mission on the space shuttle. The Ultraviolet Imaging Telescope (UIT), built at the Goddard Space Flight Center in Greenbelt MD, snapped far-ultraviolet pictures of the Veil Nebula and saw a handful of stars. One of these stars, known only by a catalog name of KPD2055+311, appeared to be at a distance that would place it behind the Veil Nebula. 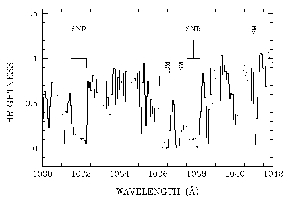 Caption: A 12 Angstrom region of FUSE data surrounding the lines of highly ionized oxygen (marked "SNR"), which arise in the supernova remnant shock fronts. (Click on figure for better version.)

In late 2003, astronomers used the FUSE satellite to observe this star and the adjacent supernova remnant filaments. The resulting spectrum of the star shows many absorption lines, or dips in light intensity. Some of these dips come from the atmosphere of the star or from cold molecular hydrogen gas in the interstellar medium, but some are due to absorption within the Veil Nebula! Indeed, the star is behind the Cygnus Loop!

The revised distance makes a tremendous difference in the calculated parameters of the supernova remnant compared with previous estimates. For instance, it's linear diameter is 90 light years instead of 150 light years. It's extimated age is 5,000 - 8,000 years instead of over 20,000 years. And it's energy content, which scales as the volume, is only 20% of that estimated for the larger distance.

The JHU news release about this observation can be found HERE.