Uncovering a Hidden Supernova Remnant
(Click on most figures to see larger versions.)


Look in any standard astronomy text book, and you will find the statement that massive stars live brief lives and then explode as supernovae, spreading their remains back out into the surrounding interstellar regions. As we look around at the Milky Way and nearby galaxies, we see many regions of active star formation, and we see many supernova remnants, but we don't see them in close proximity to each other as often as we should. Why is that? Researchers using the FUSE satellite may have discovered why. In probing a region of star formation in the nearby Small Magellanic Cloud galaxy, a satellite galaxy of the Milky Way, these researchers have found buried treasure, a hidden supernova remnant not visible in optical pictures of the region.

Caption: This picture shows the glowing cloud of hydrogen gas known as N66 in the nearby galaxy the Small Magellanic Cloud. The gas cloud is excited to glow by embedded hot stars which have formed from the gas. The brightest, youngest cluster of stars lies buried in the bright region to right of center, labelled NGC 346. The blue line shows the boundary of a region that is bright in X-ray emission, and the green labels show stars and/or positions observed with FUSE.

Supernova remnants are basically the "leftovers" from a supernova explosion. As the blast wave from the explosion moves outward, a shell of gas is swept up and heated to X-ray temperatures (millions of degrees). But after the blast wave passes, this gas can cool back down to where it becomes bright at optical wavelengths. (The Cygnus Loop supernova remnant in our galaxy is a good example.) Until recently, this bright optical emission was one of the primary ways of detecting supernova remnants, especially in galaxies beyond the Milky Way. As you can see in the optical picture above, there is no obvious shell of gas that looks like a supernova remnant surrounding the X-ray bright region.

Several pieces of work have come together recently that all tell us a supernova remnant really is present in the above picture. New X-ray and radio telescopes have increased sensitivity and spatial resolution and have looked at this region. The blue line in the figure above shows a patch of hot gas seen in X-rays with the Chandra X-ray Observatory. At the same time, the FUSE satellite was trained on various stars in in the N66 region, as indicated in green in the above Figure. Putting these different data sets together allows us to understand what is going on. 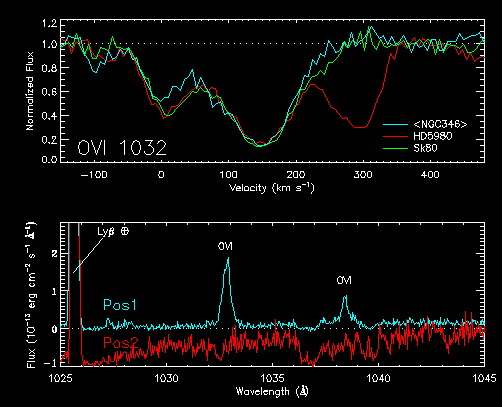 Caption: These FUSE spectra show the hidden supernova remnant in two different ways. In the top panel are "absorption spectra" of stars in the N66 region, as indicated in the Figure above. The turquoise line is from stars in NGC 346, the green line is from the star Sk80, and the red line is from the star HD 5980. Note the extra "dip" in the red spectrum. This star is BEHIND the supernova remnant, and the extra dip is due to absorption by the supernova remnant along the line of sight. In the bottom panel are two FUSE spectra taken at the positions of the two square boxes in the Figure above. Position 1 is in the edge of the supernova remnant and Position 2 does not intersect the SN remnant. Note the two upward spikes shown in turquoise in the bottom panel and labelled "O VI". These are emission lines of highly ionized oxygen created in the supernova blast wave, and arise in gas near 300,000 K (much hotter than the stars can create).

FUSE has been used in two different ways to detect and study the hidden supernova remnant. (See figure above.) Note that two of the stars observed with FUSE are within the blue contour of X-ray emission in the top Figure. The spectrum of one of these stars, HD5980, shows an extra dip, or absorption line, that arises in hot gas not visible in the optical light picture (see top panel). This star is behind the supernova remnant, and thus we see absorption from the hot gas produced by the shock wave. The other star shows no such absorption, and so it must be in front of (or possibly even inside) the supernova remnant, as shown in the cartoon below.

Caption: This diagram shows a picture consistent with the FUSE data forthe hidden SN remnant. The X-rays and absorption lines form on the back side of the expanding shell, where it encounters denser material. In this cartoon, we are viewing the N66 region from above.

Careful analysis shows that the supernova remnant is much like the Cygnus Loop mentioned earlier, except that we don't see the remnant in optical light. Why?

The optical light in a supernova remnant arises as the gas cools back down. If something keeps the gas temperature elevated, the optical emission won't form. That's exactly what Charles Danforth (JHU) and co-workers surmise is happening. The very stars that have formed in the region and are causing the big gas cloud to "glow" are keeping things hot enough that the expected optical emission cannot form. The only way to "see" the supernova remnant is by looking at invisible light: radio waves, X-rays, and ultraviolet.