Have you ever looked up on a summer night and seen a meteor streak across the sky? Meteors occur when bits of "space junk" (be they natural or human made) enter the upper atmosphere and heat up from friction. For a large enough meteor, only the surface heats up, while the interior remains intact. If you think about it, the presence of meteors tells us something very basic: that high above the earth there must be an atmosphere. If it wasn't so, there would be nothing to cause the friction that heats up the meteor and gives off the light we see!

In much the same way, FUSE astronomers are now inferring the presence of a vast, extended "corona" of hot gas surrounding our Milky Way galaxy. This hot corona, while not entirely unexpected, has never been detected. It is so thin and so hot that we look right through it all the time as we observe more distant objects in the universe! 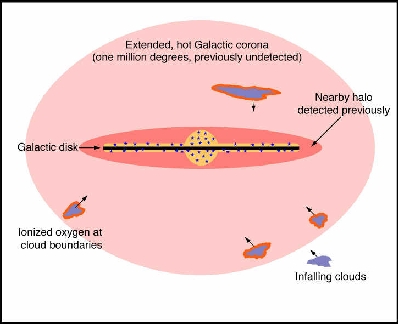 Caption: The presence of a hot halo around the disk of the Milky Way has been known for some time. Now FUSE astronomers are finding evidence for a much more extended `corona' of tenuous hot gas. Clouds of gas raining into the galaxy from the outside are heated as they pass through this corona, much like a meteor heats up as it passes through the earth's atmosphere. It is this heating of the clouds that is observed with the FUSE satellite. (Click figure to see larger JPEG version. Also, a simpler black and white version of this figure suitable for newspaper use is available by clicking HERE.)

At the American Astronomical Society meeting in Washington DC in January 2002, Dr. Ken Sembach and collaborators announced a summary of 94 observations of distant quasars and active galaxy nuclei, obtained over the first two years of the FUSE mission. In about 2/3rds of these observations, Sembach et al. find a spectral signature, an absorption line, of high velocity ionized oxygen gas.

In many cases, the Doppler shift of these spectral signatures line up with the velocities of cool interstellar clouds observed with radio telescopes. Many of these so-called "high velocity clouds" (or HVCs for short) are thought to be material falling into our galaxy from the outside (see figure above). Perhaps they are material left over from the formation of our Galaxy or other galaxies in the Local Group of galaxies, because the chemical composition of these clouds does not appear as enriched in heavy elements as the material in our Galaxy. The clouds in question have negative velocities, which means they are approaching us at high speed (falling into our Galaxy). Thus their spectral signature gets Doppler-shifted out from under the galactic ionized oxygen signature, which is seen near zero velocity. 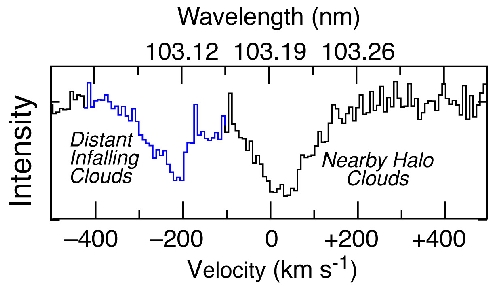 Caption: This figure shows a tiny part of the FUSE spectrum of a distant quasar. The light from the quasar is used as a background source, and "dips" in the spectrum are caused by absorption of this background light by intervening gas. Since wavelength of light is related to velocity (through the Doppler formula), we show a wavelength scale on the top (in nanometers) and a velocity scale on the bottom (in kilometers per second). The absorption near zero velocity comes from hot ionized oxygen gas close to our sun (and thus with similar velocity to us). The dip near -200 kilometers per second (shown in blue above) is similar hot gas at the velocity of a "high velocity cloud" that is falling into our Galaxy. (Note: 200 km/sec = 720,000 km per hour, or almost half a million miles per hour if you prefer!) This hot, high velocity gas has been detected at over 50 directions looking through our galaxy's halo, indicating that this hot gas is widely distributed around our Galaxy. (Click figure to see larger JPEG version.)

But why do we see highly ionized oxygen gas associated with these cold clouds that are falling into our Galaxy? That is where the analogy with the meteor comes in! If these HVCs were falling through a tenuous "atmosphere" around our Galaxy, their surface layers would be heated enough to cause the spectral features observed with FUSE. (If it were not so, there is no mechanism known that would produce the ionized oxygen signatures.) Hence, the presence of a galactic corona is inferred!

The galactic corona has gone unobserved for so long because it is hot (about 1 million degrees) and very low density (perhaps only one particle per 10,000 cubic centimeters on average!). Its outer edge is ill-defined (there probably is no real "edge" at all) but the observations indicate the corona extends at least as far as our neighboring galaxies, the Magellanic Clouds, which are over 150,000 light years away. Thus, this invisible component of our Galaxy could be hiding as much as 100 million solar masses of material and still be essentially invisible, except for the cloud heating observed with FUSE.

The presence of a very hot corona surrounding the Milky Way was first postulated by the late Lyman Spitzer of Princeton University in the 1950s. Astronomers have known about a much smaller halo of hot gas around the galactic disk for some time. Indeed, studies of this halo are a primary goal of FUSE observations. However, the halo is associated directly with the disk of our Galaxy, and is thought to be material ejected above the plane by supernova explosions and strong stellar winds (a so-called galactic fountain). The corona inferred by these new results is much more extensive than the halo identified previously, and represents a new component of the galaxy. Models of how galaxies formed and have evolved over time will now have to include this new component!