FUSE observes a young star, but it's what is NOT there that is most interesting! 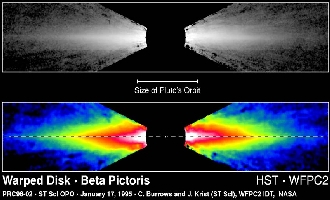 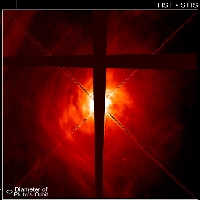 Caption: (left) Hubble Space Telescope image of Beta Pictoris. The star, which would appear at the center, has been blocked out to permit the edge-on dust disk to be seen. Different details are visible in the black and white and color representations of the data. (right) Hubble image of the star AB Aurigae, another young star whose dust disk is seen in a more "face-on" orientation. Nascent solar systems may be forming in these dust disks.
Click pictures for larger versions.

The Beta Pictoris star system is estimated to be about 20 million years old, relatively young for a star whose life will ultimately span billions of years. It is about 60 light years from Earth, in the direction of the southern constellation Pictor. Like many young stars, Beta Pictoris is surrounded by a disk of gas and dust. From earth we happen to view this disk almost exactly edge-on, as shown in the image at left above. Previous observations have suggested to scientists that planets may be forming (or recently formed) deep within this disk.

One of the things seen in previous observations of Beta Pictoris is absorption from molecules of carbon monoxide, CO. This was somewhat surprising because calculations indicated that CO molecules only have a lifetime of about 1000 years in the harsh environment surrounding Beta Pictoris. Hence, new CO must be continually produced, perhaps from evaporating comets, in order to be seen. Since hydrogen is the most abundant element in the universe (and molecular hydrogen is the most abundant molecule), it was expected that molecular hydrogen (H2) should also be plentiful in the Beta Pictoris disk. In interstellar gas clouds, for instance, one normally detects 100,000 times more H2 molecules than CO molecules. One published report using data from the Infrared Space Observatory (ISO) seemed to indicate the presence of H2 in emission in the infrared part of the spectrum, although the detection was of low quality.

The FUSE satellite was trained onto Beta Pictoris in early March 2001 in order to both learn about the star itself and its enigmatic disk. The figure below shows a small portion of the resulting spectrum. The two larges humps in this figure are broad emission lines from ionized oxygen, and originate in the outer atmosphere of the star itself. The presence of these lines indicates a very hot outer region on the star, perhaps an extended chromosphere much larger and more active than our sun's. However, even more surprising, the FUSE spectrum shows no evidence of molecular hydrogen, which would produce visible dips (absorption lines) against the oxygen emission lines (see figure). This measurement is many times more sensitive to the presence of molecular hydrogen than the ISO measurement mentioned above, but it only pertains to the sight line directly towards the star.

Caption: The white histogram line in this figure shows a portion of the FUSE spectrum of Beta Pictoris. The two main humps in this spectrum are emission lines from highly ionized oxygen in the outer atmosphere of the star itself. Since the star is viewed directly through the surrounding edge-on disk, any molecular hydrogen in the disk would absorb some of the light from the star, as shown by the red and blue lines. The absence of these dips in the actual FUSE data thus severely limits the amount of molecular hydrogen gas that can be present in the disk surrounding Beta Pictoris.

If both results are correct, the only way for this conflict to be resolved is if the H2 is not evenly distributed throughout the disk. In this scenario, H2 may be clumpy and the FUSE sightline missed it. These clumps might represent giant planet embryos! The other option is that the marginal ISO detection overestimates the amount of H2. In this case, there would be much less molecular hydrogen visible in the Beta Pictoris system than expected. So where could it be?

The answer may be COMETS, perhaps those same comets that are needed to continually supply the carbon monoxide that is observed! Calculations indicate a swarm of comets around Beta Pictoris would be warm enough to slowly release carbon monoxide, but far too cold to release molecular hydrogen, which would remain locked up as water (H2O) ice.